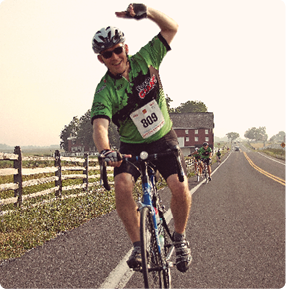 Fueling your muscles for cycling 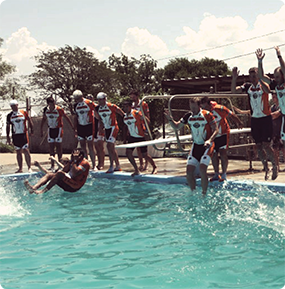 Exercising muscles need fluid and energy to perform at their best. With every pedal stroke you complete, a small amount of body fluid is lost through sweating and a little bit of energy fuel is burned inside your muscle cells. The more fluid you lose and the more energy your muscles burn, the more tired you become. So it is important that you consume fluid and energy during all of your rides. By consuming these vital nutrients for muscle performance during all of your training rides and during Bike MS itself you will feel better and ride better than you would otherwise. The two main causes of fatigue are dehydration and depletion of energy stores in the muscles. Sweat is the body’s coolant. During an intense workout, the muscles generate heat, which is carried by the blood through capillaries near the surface of the skin. Sweat glands release sweat (made up of water and electrolyte minerals) that evaporates, cooling the skin and the blood just underneath. Cooled blood thenflows back to cool the body’s core.

The Importance of Hydration

Sweating is therefore an essential mechanism for regulating body temperature. However, the loss of water that comes with perspiration limits the capacity of the blood to carry vital nutrients, such as glucose, fatty acids, and oxygen, to working muscles. The capacity of the blood to remove the byproducts of metabolism, including carbon dioxide and lactic acid, is compromised as well. The result is an increased demand on the circulatory system, which is approximately 70 percent water. As little as a 2% loss in body fluids will negatively impact cardiovascular performance. In addition to water, sweat contains minerals called electrolytes that serve important functions in the body. For example, sodium helps regulate fluid balance and potassium assists muscle contractions. Excessive loss of electrolytes through sweating can cause problems such as dizziness and muscle cramping. The problem becomes even more complicated because athletes can’t depend on their normal thirst mechanism to replace the fluid they lose during exercise. We call this phenomenon involuntary dehydration. That’s one reason why sports drinks that contain electrolytes are beneficial. Not only do they restore electrolytes lost in sweat, but salt also stimulates thirst, resulting in continual consumption of fluids. It’s best, however, to drink on a schedule. Specifically, you should drink 4 to 6 ounces of water or a sports drink every 12 to 15 minutes during workouts. The heavier you are, the higher the air temperature, and the faster you ride, the more fluid intake you need. Carry at least one full fluid bottle in a frame-mounted cage on all of your rides and refill it as necessary. Another option is to wear a fluid bladder backpack, which holds a large volume of fluid and allows you to drink hands-free through a hose.

The second component of exercise nutrition is carbohydrate. Carbohydrate is the primary fuel that powers the muscles during exercise. But carbohydrate is available in only a limited supply in the body—enough to fuel a couple of hours of moderate-intensity activity in the average rider. When carbohydrate fuel runs low, fatigue sets in. However, by consuming carbohydrate in a quickly and easily absorbed form during exercise, cyclists can delay fatigue much longer.

Water is Not Enough

Drinking water during workouts is much better than drinking nothing. But sports drinks are preferable. A quality sports drink can supply the fluid, electrolytes, and carbohydrate riders need to maximize their endurance. Drinking water alone will not do the job, because it does not replace the electrolytes lost in sweat or the carbohydrates burned for energy. Studies have repeatedly shown that exercisers who use a sports drink during workouts are able to go faster and longer than those who drink plain water.

Most sports drinks are very similar. The ideal carbohydrate level for a sports drink is 6 to 8%, and most sports drinks are formulated accordingly. Also, a majority of sports drinks contain electrolytes in amounts adequate to replace what is lost through sweating. During your longest rides you will probably get hungry. The best solid foods to carry with you and eat during long rides are energy bars. Choose a bar that has approximately the same 4 to 1 ratio of carbs and protein that you should also look for in a sports drink, and avoid bars that have more than a very small amount of fat.

QUICK TIP — Be sure to drink 12-18 oz of water per hour of exercise. Sports drinks are more effective than water since they replenish energy. 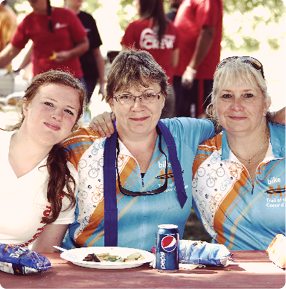 Nutrition is the foundation of post-exercise recovery, because it provides the raw materials with which your body can make physiological adaptations in response to training. If you take in the right nutrients, in the right amounts, at the right time after workouts, you will recover far more quickly and thoroughly than you will if you don’t practice proper nutritional recovery.

The Importance of Timing

Timing is essential with regard to post-exercise nutrition because your body is primed to sponge up needed nutrients at this time. For example, synthesis of muscle glycogen — a form of stored carbohydrate that serves as the body’s primary energy source during endurance exercise — proceeds two to three times faster in the two hours immediately following exercise than it does at any other time.

There are three main components of post-exercise muscle recovery. First, it is necessary to restore fluids lost during exercise. When a cyclist sweats heavily, he or she loses a lot of water and electrolytes. Drinking a sports drink during rides can slow the rate of fluid loss, but can’t stop it completely. So it’s important to make up the deficit by continuing to use a sports drink with electrolytes after exercise. If you do not rehydrate properly before the next workout, you could experience overheating, muscle cramps, and other problems.

The second component of muscle recovery is putting carbohydrate fuel back in the muscles. Again, carbohydrate is the muscles’ main fuel source during moderate intensity exercise. The longer a workout lasts, the lower your muscle fuel supplies become. By using a sports drink containing carbohydrates during rides, you can slow down this process. But it’s impossible to take in carbohydrate during intense exercise as fast as it’s burned. So you need to continue taking in carbohydrate after exercise, as well. If you don’t get your muscle fuel levels back to normal in time for the next ride, you’ll be sluggish and sloppy.

QUICK TIP — Consuming carbohydrate and protein within 45 minutes after your exercise will help you recover faster.

Finally, the third component of muscle recovery is fixing the damage done to muscle tissue during exercise. High-intensity physical activity can cause small tears in muscle tissues. In addition, some muscle proteins are broken down for energy during hard exercise. Also, hard exercise produces damaged molecules known as free radicals, which attack muscle cells. In order to undo all this damage, you need to consume protein after each ride. You should also get antioxidants such as vitamins C and E, which help protect the muscles tissues against damage from free radicals. If you are hungry after your rides, eating is fine. Just make sure you get all the same nutrients you would get in a quality sports recovery drink without a lot of extra stuff (fat, excess protein) that might slow down the delivery of nutrients to your muscles. Some energy bars are good recovery foods. In any case, you will need to drink some form of fluid to meet your body’s hydration needs after workouts.