I Ride with MS

People who ride in Bike MS may do so to support family members, friends or coworkers who have been diagnosed with multiple sclerosis. But, there are also legions of participants who live—and ride—with the disease, despite challenges such as fatigue or weakness. I Ride with MS is a special Society program that recognizes Bike MS cyclists who are also living with multiple sclerosis.

Anyone living with MS who is interested in cycling to support the MS movement can join the program, enjoy special day-of-event benefits and receive a complimentary “I Ride with MS” jersey. Genzyme and MS One to One, and Primal Wear are proud supporters of the I Ride with MS program, available through all 100 Bike MS events nationwide.

I Ride with MS participants are not only committed to cycling to create a world free of MS, but to increasing awareness. For more information or to register for the program, contact the Society about this program today! 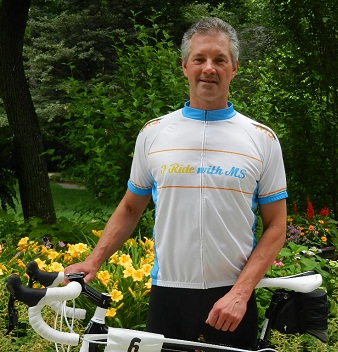 Riding 100 miles in one day is no easy task for any trained cyclist. Throw multiple sclerosis into the mix and it’s a near impossibility. But that’s not the case for Todd Frauendorfer, who is one of the stronger riders among the more than 2,300 that participate annually in Bike MS: Tour de Farms, the largest charity ride in Illinois, which this year takes place Saturday and Sunday, June 21 and June 22, in DeKalb.

While in the past, Bike MS was reserved for cyclists of all abilities looking to ride and raise funds for multiple sclerosis, in recent years the event has also become a proving ground for those living with the disease, like Frauendorfer, to test their limits through exercise and physical exertion. In 2013, nearly 100 riders living with MS participated in the ride.

“I’m a big proponent of staying active,” says Frauendorfer, a resident of Aurora. “That’s not to say I wasn’t exhausted after completing the 100 miles.” For Frauendorfer, the exhaustion soon turned to excitement at last year’s event, after being greeted by so many friends, teammates and family members. Another 50 miles the second day was just the icing on the cake.

“For me, Bike MS is such a healthy weekend in that you combine the physical part of biking with the emotional aspect that comes with seeing all of the supporters that come out for the weekend,” says Frauendorfer, who was met by fellow riders including his wife Linda and teammates at the finish line. “There’s a great sense of community and accomplishment since we are all working towards the common goal of ending MS.”

The story of Frauendorfer’s diagnosis is not unlike the many other 400,000 plus individuals who are living with the disease in the U.S. He was first treated for optic neuritis in the summer of 2001. His vision improved within weeks, but several years later, in 2007, his vision issues returned, coupled with balance problems. Following a visit to a neurologist, Frauendorfer’s MRI confirmed that he had multiple sclerosis. Once diagnosed, he began educating himself about the disease, determined to keep it from changing his life as much as possible. By combining his faith, traditional medicine and health and wellness principles, he is able to live a very normal life. The one challenge is the uncertainty and unpredictability of the disease.

In 2012, a friend and co-worker, Matt Kramer of Geneva, Ill., formed team Petal Pushers and together they rode in Bike MS: Tour de Farms. In just three years, their team members, mileage, and fundraising efforts have accelerated significantly. As of June 1, the Petal Pushers were the largest team in Illinois with 98 riders and the number one fundraising team overall for 2014, having already topped the $57,000 mark. Frauendorfer himself has raised more than $10,000.

“Bike MS gives me a great opportunity to raise awareness, educate others, encourage those who are also diagnosed, and raise money to support the programs that improve the lives of those living with the disease,” explains Frauendorfer. “In the past three years, it is amazing the number of people we have encountered that are living with MS or have close friends or family that have been impacted by MS. Participating in the Bike MS event is one way that I can actually feel like I’m doing something about MS rather than just living with it.”

For Frauendorfer and his team, participating in the 33rd annual Bike MS event—which starts and finishes at the Northern Illinois University Convocation Center (1525 West Lincoln Highway, DeKalb)—brings about a sense of family, community, and accomplishment all wrapped into one. They are also nearing their goal of having 100 cyclists on the team this year, with riders coming in from thousands of miles away, including his brother from Florida, high school friends from Wisconsin and Michigan, and a co-worker from the Netherlands.

“We knew the best way to raise more money and awareness of MS was to get more riders. Now, we’ve almost doubled our team size again simply by asking last year’s team members to invite at least one co-worker, family member or friend to join them on the ride,” says Frauendorfer. “I believe that if everyone would ask one person to join them at Bike MS we could dramatically grow this great event and its impact in the lives of those living with the disease.”

Cyclists can choose to ride one or two days on one of many fully-supported route options ranging from 15 to 200 miles. Twenty support-and-gear vehicles stocked with first aid and repair supplies continuously patrol the routes throughout the day, and riders are additionally supported with rest stops every 10 to 15 miles. Participants are treated to a great party with live music, food and drinks upon their return. Last year, more than $1.6 million was raised to benefit multiple sclerosis research, programs and services throughout Illinois.

Nancy Dressel: Crankin' For a Cure 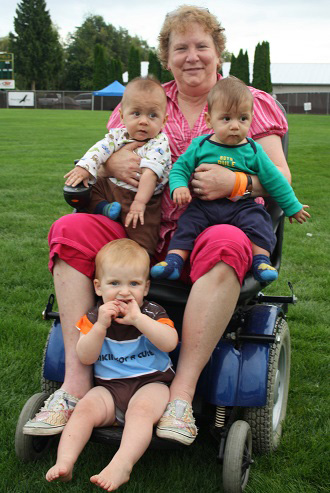 Nancy Dressel always finds a way to give to the MS movement, whether she’s raising money by selling her hand-sewn aprons at a farmer’s market near her home in Port Orchard, Wash.; riding a recumbent bicycle to lead her Bike MS team, Crankin’ for a Cure; or, connecting with people to spread awareness about MS.

“I’m loud,” says Nancy, who was diagnosed in 1990 at age 35. “I’m not shy. I want to be out in the fun. I want to talk to people.” Which is why Bike MS is such a great fit for her. “The riders just blow me away,” she explains. “They’re out there cranking 150 miles and before that, they’re knocking on people’s doors for donations, and some of them don’t even know anyone with MS. I’ve had grown men get down on their knees to face me on my recumbent bike and say, ‘tell me your story.’ It chokes me up.”

Nancy had been volunteering at the Society for years when her daughter Jenn, who was also a volunteer and a Society board member in Seattle, formed the Crankin’ for a Cure team in 2006 and convinced her mother to join. The team soon grew to include Nancy’s other daughter, Stephanie, and more than 20 friends and family members, including three small supporters who make up in enthusiasm what they lack in size.

“My grandson Trey was only three weeks old at my first ride in 2012,” says Nancy. “Now my family includes twin grandsons, Luca and Weston, so last year I had three grandsons sitting on my power chair at the ride.”

For Nancy, Bike MS is perhaps most of all a way to connect with the community. “I use the words ‘warm and fuzzy’ when talking about my neurologist because you’ve got be able to talk about everything with a neurologist. Well, the experience of Bike MS is also warm and fuzzy. I felt that immediately—the riders just accepted me right away into the fold.”

Fontella Addo: Start From Where You Are

Fontella Addo, 30, remembers her first experience with the National Multiple Sclerosis Society when she was going through yet another of what had become an annual MS exacerbation. “A woman from the Society helped me to get my first wheelchair,” she says. “I had to accept that I needed a chair at the time of the exacerbation and I couldn’t afford it. She made phone calls and did everything she could to help.”

Fontella continued to use services that the Society offered, but hadn’t considered Bike MS as a way to give back until last year, when a coworker found out she had MS and asked her to join his team, The Spokesmen. “When he found out, oh man, he pushed, pushed, pushed,” Fontella, who lives in Leominster, Mass., remembers. “I was like, I will do anything to help, but I haven’t ridden a bike since I was 10.” But he didn’t give up. “He kept pushing, so I finally joined the team and that was that.”

Fontella’s first ride took place last year in the Bike MS: Cape Cod Getaway. “It was definitely a learning experience for me,” she says. “I challenged myself within my limitations.” She then experienced another exacerbation that October. “Had you asked me last year, I would have been planning to train in the gym on a bike all year. I would’ve bet everything I’d be in tiptop riding shape, but the reality is that I’ll be in whatever shape my body allows me to be.”

And, after years of experience since her diagnosis in 2003, she knows to listen to that body. “It took getting sick several times to realize how my body works,” she says. She began exercising and watching her diet. “That’s when I learned to feel better,” she says, going three years without an exacerbation. As an I Ride with MS participant, she hopes to use her own experience with the disease to inspire others. “People don’t understand what it’s like to be there, trying to get back, to get to where you want to be. It’s important not to get discouraged. You have to learn to work with the circumstances, start from where you are and build from there.”

This program is made possible through partnership with Genzyme and MS One to One and Primal Wear.