COVID-19 What You Need to Know | COVID-19 Response Fund 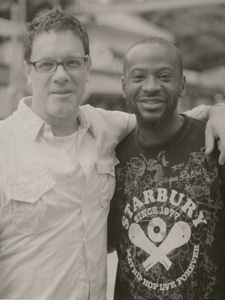 “Since I joined Pink Martini, I haven’t had a single MS relapse.”

A tribute to the drummer of Pink Martini from the National MS Society, Oregon Chapter.

Drumming can be brutal…

It requires verve, focus, stamina, precision, and a tireless commitment on par with a pro basketball player. Especially when you’re providing the backbeat to a group whose sound traverses the globe. Any one Pink Martini show will surely include Afro-Cuban and salsa rhythms, jazz beats, and classical percussion arrangements, all potentially within the same song!

Diagnosed at 21 years old, Anthony was concerned that his diagnosis would affect more than his drumming. “I had just finished college and was preparing to start my life. And I worried a lot: ‘Will I ever find somebody who can deal with me at my worst?’”

For those unfamiliar, MS is an unpredictable, often disabling disease of the central nervous system that disrupts the flow of information within the brain, and between the brain and body. MS can impact everything from walking, to reading, to keeping a grip on one of a drummer’s most critical assets.

“Early on, I had severe numbness in my hands,” says Anthony. “I would lose drumsticks all the time. Or while playing and getting overheated, I would have difficulty seeing out of my right eye which made it hard to read charts. That was very frustrating.”

After years managing through a range of symptoms, Anthony joined Pink Martini.

It’s common for people living with MS to hide in the “MS Closet.” Because they’re afraid others might judge or treat them differently. Not Anthony.

“I’ve always been very honest with every band I’ve worked with. It’s the right thing to do. And the guys in Pink Martini are very supportive. After all, everybody has a thing they battle with—diabetes, other health issues—but we come together and talk about how we’re doing. Aside from playing wonderful music and being in amazing places, it’s a family environment. Everybody cares about each other.”

At the Oregon Chapter, we care about Anthony, too. Over the past few years, he’s shared his story for our newsletter and blog, spoken at our national conference, and even provided heartwarming video sound bites for our annual Gala.

His genuine, open, honest accounts of life with MS have provided hope for so many who live with this strange disease that, so far, has eluded a cure. But we’re working hard at the Society to fund research that has already proven to slow the progress of the disease, and we believe there will be a cure during Anthony’s lifetime.

We were thrilled when Anthony introduced us to Pink Martini’s generous management team in 2014, which led to a one-night benefit in June 2015 titled, “Pink Martini Wears Orange.”

(Hint: Orange is the National MS Society’s brand color, so everyone in attendance was required to don a splash of orange—hat, tie, socks—one guy even wore a funky wig.)

Little did Anthony know, in addition to celebrating some of our strongest supporters, we were secretly crafting the event to honor Anthony. And oh, what a night it was! Replete with over a hundred guests drinking, eating, and singing along with the band at Thomas Lauderdale’s ultra-cool loft in downtown Portland.

Remember what Anthony said when he was first diagnosed? “Will I ever find somebody who can deal with me at my worst?” Though Anthony was certainly at his best during the benefit, we were all blessed with an appearance by his talented wife, Portia, who sang alongside China Forbes.

Before Pink Martini launched into their awesome set, Anthony spent a few minutes talking about his life with MS, drumming, his family, his hopes for the future, and this one glowing truth that resonated with everyone because it aligned so perfectly with the night’s purpose:

“Since I joined Pink Martini, I haven’t had a single MS relapse.”

Help us keep Anthony and people like him moving.

Give today. Every donation counts in the pursuit to #endMS.

-Your friends at the National MS Society, Oregon Chapter

If you would like, you can add your name and a short message to our Guest Book. Thank you.

Views and opinions expressed by third parties placing material on this page are not necessarily representative of the views of the National MS Society. If you feel this page contains objectionable content, or you have a technical concern, please contact the system administrator of this chapter. Be sure to include as much information as possible.